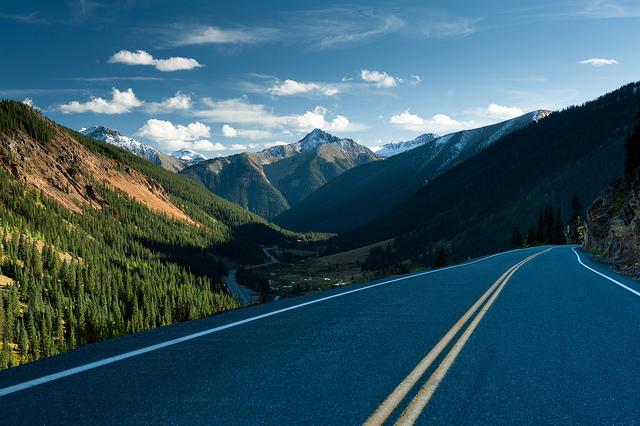 The 'Million Dollar Highway' is a 24-mile stretch of US-550 that joins Ouray with Silverton in Colorado. Although the Million Dollar Highway is the shortest route in our Great American Road Trip series, it offers one of the most spectacular journeys you can take when traveling by car.

Designed by the Russian immigrant Otto Mears in 1883, the Million Dollar Highway was built over the Red Mountain Pass – an old stagecoach trail that provided passage to miners during the American frontier. As such, the road provides one of closet ways to experience the West as if it were still wild today.

As Montrose Regional is the closest airport to the Million Dollar Highway, this is where the suggested route for this road trip begins. However, Telluride, Grand Junction and Durango airports are also all within reasonable driving distance.

The drive from Montrose to Ouray is roughly 40 miles as you take US-550 south along the Uncompahgre River and through Ridgway State Park. If you choose to stop, the park boasts a large reservoir with its own sandy beach and a spectacular view of Sneffel's Range – mountains dubbed by locals as the 'Switzerland of America'. Ridgway State Park also has a range of activities aimed at the adventurous, including rock climbing, whitewater rafting, and in the winter months, skiing and ice climbing.

Once you have passed through Ouray, a beautiful old town often referred to as the 'gem of the Rockies,' it's time to jump back onto US-550 to begin your journey along the Million Dollar Highway.

Stories of how the Million Dollar Highway earned its name vary; some say it's because the road cost a million dollars a mile to build. Others say the fill dirt used to construct the road contains millions of dollars' worth of ore. One tale even claims the name comes from an old lady exclaiming she wouldn't drive the road again in winter 'for a million dollars!'

Whether the latter of those three stories is true or not, you definitely shouldn't be put off taking this road trip. Yes, the road bears witness to significant snowfall over the winter months – however, because the road is a state highway, every effort is made to keep it safe and open at all times.

Red Mountain is a set of three peaks that get their name from the red iron ore rocks that cover their slopes. If you look closely from your vehicle, it is still possible to spot the region's old mines, which have wonderful names such as the Joker Tunnel and Yankee Girl. However if you want to explore the old mines more closely, there are several hiking and biking trails that pass nearby.

Next, the Million Dollar Highway continues along Uncompahgre Gorge. The Gorge is a deep canyon that has been cut into the landscape by the dual water flow of the Uncompahgre River and the Red Mountain Creek. Several waterfalls – including Bear Creek Falls – plunge into the canyon, creating yet another site of astounding beauty along the road.

After you pass through Uncompahgre Gorge and traverse several more miles of US-550, you will reach Ironton Park. The park includes a four mile trail of the surrounding area that passes through the old town of Ironton. Founded in 1833, the town was once a thriving industrial hub and home to thousands of miners who worked on the Red Mountain slopes. Now all that remains, however, is a ghost town that offers an eerie yet beautiful reminder of the area's frontier heritage.

The Red Mountain Summit and Silverton

As you approach the summit of Red Mountain, there is a mass of interpretative signs that explain the nature and historical relevance of the area's mining tradition. Once you have reached the summit, you should take a moment to look back across the landscape you have just conquered, before beginning the descent to Silverton. The town of Silverton is a National Historic Landmark that, like Ouray, is full of period architecture that complements the old-worldly feel of the region.

Although the Million Dollar Highway officially ends once you have reached Silverton, US-550 still offers more than one spectacular attraction on its way to the next big town, Durango.

Highlights include San Juan National Forest, Molas Lake and Molas Pass – the latter of which is reported to have the cleanest air in North America. The fresh air of Molas Pass, combined with an elevation of more than 10,000 feet, creates the ideal atmosphere for nature to flourish. As such, the nearby scenery is sprinkled with wildflowers throughout spring and populated by mountain goats, elk, black bears and deer.

A CDW/LDW works by providing cover for the entire cost of damage to a rental car (minus a deductible) in the event of an accident or loss. When you pick up your rental car, in most cases, your rental company will attempt to sell you their CDW/LDW cover over the counter. However, waiting until you pick up your car to buy CDW/LDW can be very expensive.

In contrast, if you purchase CDW/LDW cover online from Insuremyrentalcar.com before you travel, you could save yourself more than 70% on the prices offered by your rental company.